When walking through Sololaki, Tbilisi’s Old City, guests of the Georgian capital can understand why it is called the “Caucasian Paris”. 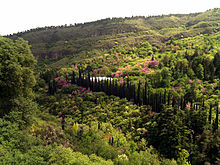 Tbilisi is located in the South Caucasus at 41° 43′ North Latitude and 44° 47′ East Longitude. The city lies in Eastern Georgiaon both banks of the Mt’k’vari River. The elevation of the city ranges from 380–770 metres above sea level (1,250–2,530 ft) and has the shape of an amphitheatre surrounded by mountains on three sides. To the north, Tbilisi is bounded by theSaguramo Range, to the east and south-east by the Iori Plain, to the south and west by various endings (sub-ranges) of the Trialeti Range.

The relief of Tbilisi is complex. The part of the city which lies on the left bank of the Mt’k’vari River extends for more than 30 km (19 mi) from the Avchala District to River Lochini. The part of the city which lies on the right side of the Mt’k’vari River, on the other hand, is built along the foothills of the Trialeti Range, the slopes of which in many cases descend all the way to the edges of the river Mt’k’vari. The mountains, therefore, are a significant barrier to urban development on the right bank of the Mt’k’vari River. This type of a geographic environment creates pockets of very densely developed areas while other parts of the city are left undeveloped due to the complex topographic relief.

To the north of the city, there is a large reservoir (commonly known as the Tbilisi Sea) fed by irrigation canals.

Tbilisi Sea is the largest body of water in Tbilisi.

Tbilisi has a humid subtropical (Köppen climate classification Cfa) with considerable continental (Dfa) influences. The city experiences very warm summers and moderately cold winters. Like other regions of Georgia, Tbilisi receives significant rainfall throughout the year with no distinct dry period. The city’s climate is influenced both by dry (Central Asian/Siberian) air masses from the east and oceanic (Atlantic/Black Sea) air masses from the west. Because the city is bounded on most sides by mountain ranges, the close proximity to large bodies of water (Black and Caspian Seas) and the fact that the Greater Caucasus Mountains Range (further to the north) blocks the intrusion of cold air masses from Russia, Tbilisi has a relatively mild microclimate compared to other cities that possess a similar climate along the same latitudes.

The average annual temperature in Tbilisi is 13.3 °C (55.9 °F). January is the coldest month with an average temperature of 2.3 °C (36.1 °F). July is the hottest month with an average temperature of 24.9 °C (76.8 °F). Daytime high temperatures reach or exceed 32 °C (90 °F) on an average of 22 days during a typical year. The absolute minimum recorded temperature is −24.4 °C (−11.9 °F) on January 1883 and the absolute maximum is 42.0 °C (107.6 °F) on July 1882.[29] Average annual precipitation is 396 mm (15.6 in). June is the wettest month (averaging 58 mm (2.3 in) of precipitation) while January and December are the driest (averaging 17 mm (0.7 in) of precipitation). Snow falls on average 15–25 days per year. The surrounding mountains often trap the clouds within and around the city, mainly during the Spring and Autumn months, resulting in prolonged rainy and/or cloudy weather. Northwesterly winds dominate in most parts of Tbilisi throughout the year. Southeasterly winds are common as well. 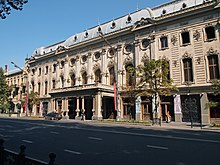 The architecture in the city is a mixture of local (Georgian) and Byzantine, Neoclassical, Art Nouveau, Beaux-Arts, Middle Eastern, and Soviet Stalinist architectural styles.[38] The oldest parts of town, including the Abanot-Ubani, Avlabari, and to a certain extent the Sololaki districts clearly have a traditional Georgian architectural look with Near Eastern influences. The areas of downtown Tbilisi which were built or expanded mainly in the 19th century (Rustaveli Avenue, Vera district, etc.) have a chiefly Western European look, but they nevertheless contain individual examples of European pseudo-Moorish architecture, such as the Tbilisi Opera.[3]

The start of the 20th century was marked by an architectural revival, notably, with an art nouveau style. With the establishment of the communist government, this style was decreed as bourgeois and largely neglected. An example ofStalinist architecture in Georgia was the 1938 Institute of Marx, Engels, Lenin (მარქს-ენგელს-ლენინის ინსტიტუტის შენობა) building, also referred to by the abbreviation IMELI (იმელი) in Georgian.[4] 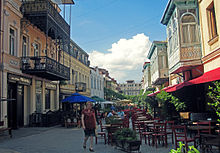 Following privatization, this building was supposed to be converted from 2006 to 2009 into a five-star luxury Kempinskihotel by the UAE-based Dhabi Group.[39] As of 2013, no refurbishment had been achieved.

The architecture of the later 20th century can mainly be identified with the building style that was common during the Soviet era throughout the Soviet Union and the countries under Soviet occupation.

This included building large, concrete apartment blocks as well as social, cultural, and office facilities, like for example theTbilisi Roads Ministry Building. Since the break-up of the Soviet Union, Tbilisi has been the site of uncontrolled/unsanctioned building projects. Since 2004, the city government has taken new initiatives to curb uncontrolled construction projects with mixed success. In the near future, Tbilisi will have three skyscraper complexes. TheAxis Towers, Redix Chavchavadze 64, and the new Ajara Hotel/Business Complex, which is currently under construction will be the tallest buildings/skyscrapers in the Caucasus.[5]

Tbilisi has important landmarks and sightseeing locations. The Parliament and the government (State Chancellery) buildings of Georgia, as well as the Supreme Court of Georgia, are in Tbilisi. The city has important cultural landmarks such as the Georgian National Museum, Tbilisi State Conservatoire, Tbilisi Opera and Ballet Theatre, Shota Rustaveli State Academic Theatre, Marjanishvili State Academic Theatre, the Sameba Cathedral, the Vorontsov‘s Palace (also known as the Children’s Palace today), many state museums, the National Public Library of the Parliament of Georgia, the National Bank of Georgia, Tbilisi Circus, The Bridge of Peace and other important institutions. During the Soviet times, Tbilisi continuously ranked in the top four cities in the Soviet Union for the number of museums.

Out of the city’s historic landmarks, the most notable are the Narikala fortress (4th–17th century), Anchiskhati Basilica (6th century, built up in the 16th century), Sioni Cathedral (8th century, later rebuilt), and Church of Metekhi.

Shota Rustaveli Tbilisi International Airport is Tbilisi’s only airport, located about 17 kilometres (11 miles) south east of the city center.Handling 1.85 million passengers in 2015, it is the busiest airport in Georgia and the twenty-fifth-busiest airport in the former Soviet Union. The airport has experienced rapid growth, having more than doubled passenger numbers from roughly 822,000 in 2010 to approximately 1,847,000 in 2015.[41] Tbilisi International Airport in 2016 started to consume Solar Energy and has been the first “Green airport” in the region of Caucasus since 2008. This means that TAV Georgia has already been operating in conformity with international environmental standards and requirements for years.

The airport is the base of the Georgian flag carrier Georgian Airways.[42]

Natakhtari airfield, located at 33 km of Tbilisi, is in the town of Natakhtari. It’s used only for domestic flights to Mestia, Batumi and Kutaisi.

A new airport between Tbilisi and Mtskheta is under construction.

The Tbilisi Metro serves the city with rapid transit subway services. It was the Soviet Union’s fourth metro system. Construction began in 1952 and was finished in 1966. The system operates two lines, the Akhmeteli-Varketili Line and the Saburtalo Line. It has 22 stations and 186 metro cars. Most stations, like those on other Soviet-built metro systems, are extravagantly decorated. Trains run from 6:00 am to midnight. Due to the uneven ground, the rail lines run above ground level in some areas. Two of the stations are above ground.

Tbilisi had a tram network, since 1883 starting from horse driven trams and from 25 December 1904 electric tramway. When the Soviet Union disintegrated, electric transport went to a degradation state within the years and finally the only tram line left was closed on 4 December 2006 together with two trolleybus lines which were left.[43][44] There are plans to construct a modern tram network.[45][46]